We recently completed a fantastic job spraying UPVC windows in Alderley Edge, Cheshire. The new owners of the house shown below wanted to transform the whole look of the property. All of the brickwork to the front was to be rendered and the existing UPVC windows changed from white to grey. 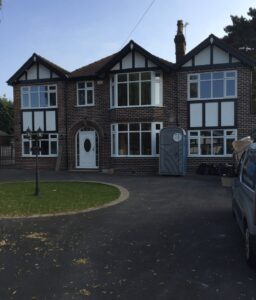 The schedule of works meant that we would have to complete the UPVC window spraying before the rendering was done. As we had 100% confidence in our UPVC paint we were more than happy to proceed.

The first job is to remove all the old silicone from around the frames as the UPVC paint does not adhere to it.

After a dusting off of the cobwebs and loose dirt all the surfaces are then initially wiped over with a solvent UPVC cleaner. The frames were still dirty however as there were a number of years worth of grime on them. To get rid of this we wipe them over with standard thinners.

The next job was to mask up the glass. We normally mask off the brickwork as well but as it was being rendered over this wasn’t necessary.

Once the masking was completed the windows were sprayed in Window Grey (RAL 7040) satin. A light dust coat is sprayed on initially to check if there is any adverse reaction indicating that contaminants still remain on the plastic. After confirming that the dust coat is good a further two coats are sprayed. 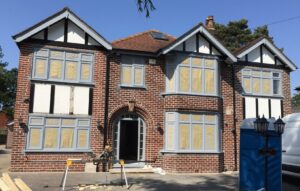 The UPVC paint dries quickly allowing the masking to be removed after 15 to 30 minutes. 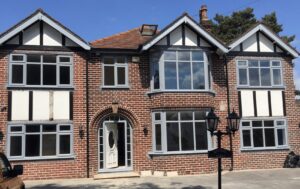 The above photo shows the house after we completed the spraying. We then returned after the rendering had been carried out. We were pleased to see that only very minor touch-ups were needed even though all the UPVC paint had been masked up by the renderers. 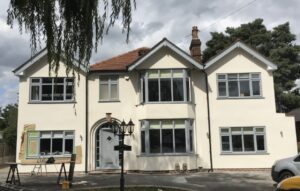 Can You Paint UPVC Cladding